Click here for page 2: "What is an Independent Council?" 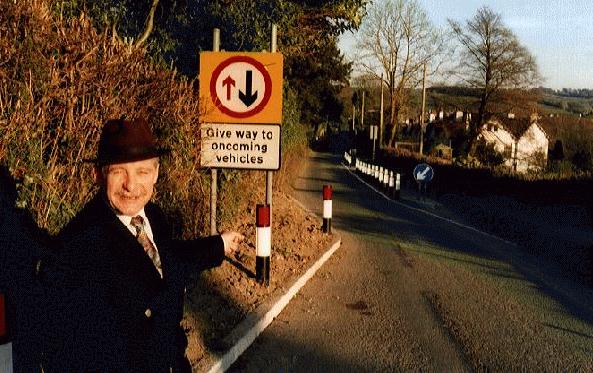 Do You Want Any More of This?

Furious Borough Councillor Roger Mathew on the site of the new chicane in Whitchurch Road, Horrabridge.

Will we have another one in Whitchurch Road, Tavistock?

Not if you vote Independent on 4th May!

Many of my constituents use the Whitchurch road, Horrabridge as a convenient route to the A386 Plymouth Road. It affects my people and I am very cross about it.
I don’t trust the sort of people who allow this sort of nonsense to decide on traffic management for Tavistock.
This sort of thing and worse is springing up all over Devon. In Samford Courtenay, the thing is lit up like Blackpool Illuminations! You can see it for miles. We have been ‘‘promised’’ some ‘‘calming’’ in Whitchurch Road, Tavistock. Are you really going to elect councillors who support this sort of nonsense?

How many teachers’ jobs has this thing cost? Ask your LibDem candidate!
No sitting Independent Borough Councillor has supported this monstrosity; it was the brainchild of a LibDem West Devon councillor who forced it through the Highways Sub-Committee with the help of her County Council colleagues. Even the Area Engineer was reluctant, because it was totally unnecessary overkill. Now she has gone to live in Crediton. No wonder!

Both LibDems and Labour want to pedestrianise Tavistock, and have supported ‘‘street furniture’’ in Brook Street, Duke Street and Bedford Square. Will you let them do it? You will if you vote for them!
They have promised MORE of this so-called "traffic calming".
I think it is an expensive, monstrous, disfiguring NONSENSE!
If you agree with me, show them by voting for the councillor who says it is NONSENSE.


Vote MATHEW
for West Devon Borough Council
on 4th May

What is an Independent Council?

West Devon Borough Council is at present independent. There are:

Key jobs like committee chairs are filled by councillors on the basis of their abilities. Chairmen and Vice-Chairmen of Committees are at present:

How does it work?
It works really well! The council is a leader in cost-consciousness and efficiency. It has NEVER had to cut services. It has NEVER needed to set an illegal budget.

What is a Political Council? On a politically-controlled council, all the committee chairs go to party hacks, regardless of ability. Decisions are influenced by party politics instead of common sense.
Let me tell you a true story:

A little while ago, the Borough Councillors of a certain political party voted AGAINST renewing old lead plumbing in council houses because they wanted to spend money on installing smoke detectors instead? Why? Well, it turned out that their party had prepared some election literature for a by-election in which they were claiming credit for installing smoke detectors. I don’t think that sort of game is right. If you agree with me, vote MATHEW and keep the party hacks where they belong - off the council! Say NO to bureacracy. Say NO to political chicanery. Vote Independent on 4th May. Vote MATHEW on 4th May.

Click here to go to top of page 1, here for top of this page.
Back to 1995 Election Address
or here to see what happened in the 1995 election.